The main objective of NCTAA is to present the research from different areas of science and technology. This conference provides a platform for researchers and scientists across the nation to exchange and share their research results about all aspects of electrical, electronics, computer science and information technology. This conference also provides an opportunity to interact and establish professional relations for future collaboration.

It’s primetime for Apple to get into cars. Nowadays, automobiles aren’t, at their core, vehicles that simply move you around. They are devices in and of themselves.

At least that’s how Sam Jaffe, an analyst with Navigant Research, sees the bigger picture in light of today’s news that Apple’s putting major resources into making an electric car. “Who better to figure out how to make this work than a device company?” he says.

According to a report from The Wall Street Journal today, Apple has put hundreds of employees on the project, which is codenamed “Titan,” and being led by Steve Zadesky, a former Ford engineer who helped develop the iPod and iPhone.

It’s unclear what Apple’s longterm intentions are, but entering the car manufacturing business would be a big leap, even for a company that has already moved from computers to music to phones. Tesla is the first new American automaker to make a profit since the foundation of Chrysler, and the industry’s history is littered with the bones of others who have tried. For its self-driving cars, Google uses rejiggered Toyota vehicles and, more recently, small cars built by Roush, an industry supplier.

Yet recent changes in the auto industry could give Apple an edge over the companies that have been doing this for a century plus, Jaffe says. The rise of information technology in and around the car—the emphasis on telematics, active safety, and driver and passenger interface—is a very real trend.

Tesla’s success in the industry could be the logical precedent to Apple’s entry: More and more, automakers are becoming tech companies. Any car made today has dozens of computers inside it, so Apple would come in with some core competencies already intact. “I don’t know how you’re not somewhat worried about that as an automotive company,” says Karl Brauer, a senior analyst at Kelley Blue Book.

No, the Cupertino company doesn’t have traditional connections to the car industry, and in that sense, it is swimming upstream. But there are hints Apple has been building up resources for this endeavor for quite some time.

For one, LinkedIn shows forty-six current Apple employees who were formerly at Tesla—rumors have it the company’s offering up to $250,000 and a 60 percent raise to those who agree to cross over—and 640 Apple employees with past experience in the automotive industry. The company has also been rumored to be aggressively recruiting engineers who specialize in battery technology, though it’s unclear if Apple would apply whatever it develops to consumer devices, the automotive market, or both.

There are also subtler, but possibly noteworthy clues: In a conversation at Parsons The New School for Design in January 2014, Apple board member Mickey Drexler said, “Steve Jobs, if he had lived, was gonna design an iCar … I think what cars need is someone with a vision on design.” And, let’s not forget, Marc Newson, the famous designer who once drew up a sweet concept car for Ford, now works at Apple. Newson’s gone on the record saying Jonny Ive hates the design of American cars. It may be a stretch, but the thinking goes that perhaps some of Newson’s time at Apple would be spent remedying that.

Besides all that, Apple’s got the money. Jaffe estimates an incumbent automaker would spend $2-4 billion over seven to 10 years on a cleansheet design. Apple, which doesn’t already have the proper infrastructure and industry connections in place, may still have to build these out, which might include creating a brand new car division (and spending more money). But with the company recently achieving a market cap of more than $700 billion, even if the entire effort failed, the amount would probably be nothing more than a rounding error against the company’s massive cash hoard. Jaffe puts his guess of the value of the effort at about $5 billion.

There’s one more thing that plays to Apple’s strengths, according to Jaffe. “When you look at the major car manufactures, they’re usually assemblers of other people’s parts,” he says. “That plays to a new entrance advantage for Apple.”

Google is in the process of developing a new feature that lets users mute the audio notifications in Chrome’s browser tabs. This new feature is available to Chromium users and could eventually come to Chrome’s Canary platform, which means that a stable release probably won’t be happening anytime soon.

HP isn’t content to just 3D print in plastic. A job ad for a “robotics scientist for 3D printing” sounds normal enough until you dive into the text and read this:

3D printing is generally reserved for working with plastic and metal. Glass is unusual. But HP has its reasons. According to a 2012 HP Labs paper: 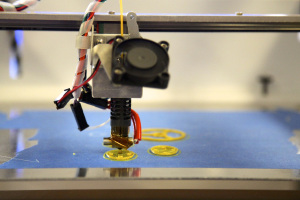 HP is due to release its first-ever 3D printer in October. We don’t know much about it except that it will be aimed at businesses and a potential boost for the ailing company. It’s unlikely it’s a glass printer though. This is a project that still lives within HP Labs.

Whatsapp: The leading OTT messaging service. There is always a prominent question baffling every user’s mind – How is Whatsapp able to make money when its services are free of cost?

On a different note, we know Facebook has recently bought Whatsapp. Do you want read about it? Read about it here! Just follow the link!

Okay, back to business now!

Whatsapp is earning its revenue through two different ways:

1) Subscription Fee: Whatsapp allows it’s user to enjoy Whatsapp services for free for first year. However, after that it charges $0.99 for continued service. But till date, I have not heard of a single person who has paid for this service. Interestingly, Whatsapp tend to extend the free service period every time a user reaches close to the expiry date.

2) According to my speculation, the revenue generation for Whatsapp is primarily through database management. All the conversations on Whatsapp are backed up on Whatsapp servers constantly. Our conversations reflect our interests, likes, dislikes and majorly depicts our preferences. This information is invaluable to big firms where relevant tailor made products can be offered after data sorting.

Let’s take a deeper look into this! 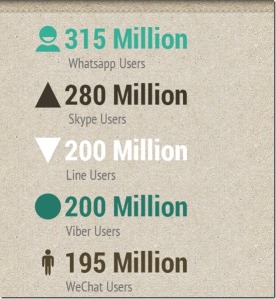 Whatsapp users have been ever increasing since launch currently numbering out users on any other competitor.

Given such high number of users, the number of messages exchanged per day is also incredibly high in case of Whatsapp- peaking as high as 11 billion. With such extensive information available on Whatsapp backups, the big companies are willing to pay handsome amounts for information extraction.

This data management scheme is merely a speculation. As evident, Whatsapp is not involved in ad marketing. Any Whatsapp user can vouch for the fact that Whatsapp does not support advertisements. Whatsapp’s CEO Jan Koum clearly states that Whatsapp is meant for instant messaging and forcing advertisements would disrupt the sole meaning of Whatsapp and instant messaging. There is no way to justify the data management ideology, but then there is no other justified revenue model as well in the store.